You Are Here: VisNEST – Visualization of Neural Brain Activity

The general idea of brain simulation is to reverse engineer the brain using large-scale simulations.

To understand the relationships between structure and dynamics on multiple scales, ranging from microscopic circuits to networks at brain scale, forms a formidable challenge in neuroscience and produces a large amount of data. This data has to be analyzed in a timely fashion to understand the simulated model and extract insight about its functioning at the aforementioned scales.

To aid neuroscientists, we developed an interactive visualization (VisNEST) within the Jülich Aachen Research Alliance (JARA). VisNEST integrates different data modalities ranging from geometric data to the spiking of individual neurons in a holistic way and runs on desktop workstations as well as in CAVE-like environments. The visualization is being used to simultaneously visualize 32 vision related brain areas of a macaque monkey. 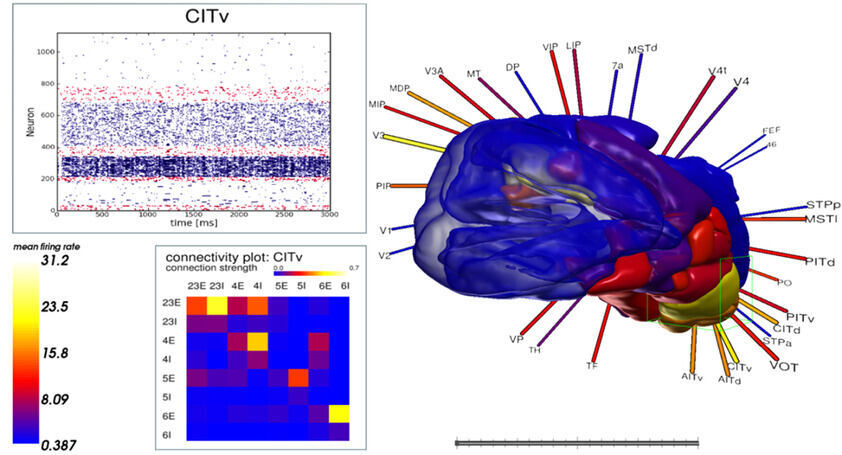 Its design is focused on enabling users to explore spatial relationship among simulated areas and see their average neural activity while interactively browsing the time-dependent simulation results. To support the inspection of simulation results, we designed four views onto the data, namely the Control View to get a quick overview of the simulation run, the Population View, which enables the user to depict cascading activation patterns of population behavior, the Connectivity View, which reveals the topology of structural connectivity used to simulate the model, and at last the Flux View, which enables the user to explore synaptic activity per unit time between areas. All views are linked to the user selection and can be switched at any given time. This approach helps scientists to relate the integrated data modalities and to form an understanding of the data.