Short description
Optical coherence tomography (OCT) systems are developed at the Fraunhofer Institute for Production Technology (IPT) for medical and industrial applications. OCT is an imaging technique that relies on a signal processing chain. This chain used in Fraunhofer’s OCT systems covers, e.g., the acquisition of data from a line scan camera, image-related adjustments, a Fourier transformation, and the reduction of signal noise. Since these OCT systems are required to provide high spatial and temporal resolution in production setups, e.g., video frame rate (25 frames/s), the parallelization and tuning of the signal processing chain is crucial.

Results
Starting point of our performance evaluations is the original serial code version (MSVS) using the Microsoft Visual Compiler (v14.0). Due to the new algorithmic matrix formulations, we also created parallel CPU versions of the code with little additional effort: With the Microsoft Compiler, we used OpenBLAS (MSVS_BLAS) and, with the Intel compiler (v17.0), we used MKL. Our new CUDA implementation was evaluated on two NVIDIA Pascal consumer GPUs (with similar results). To show the benefit of our optimizations with respect to asynchronous and overlapping operations, we present performance results of CUDA_SYNC and CUDA_ASYNC code versions. 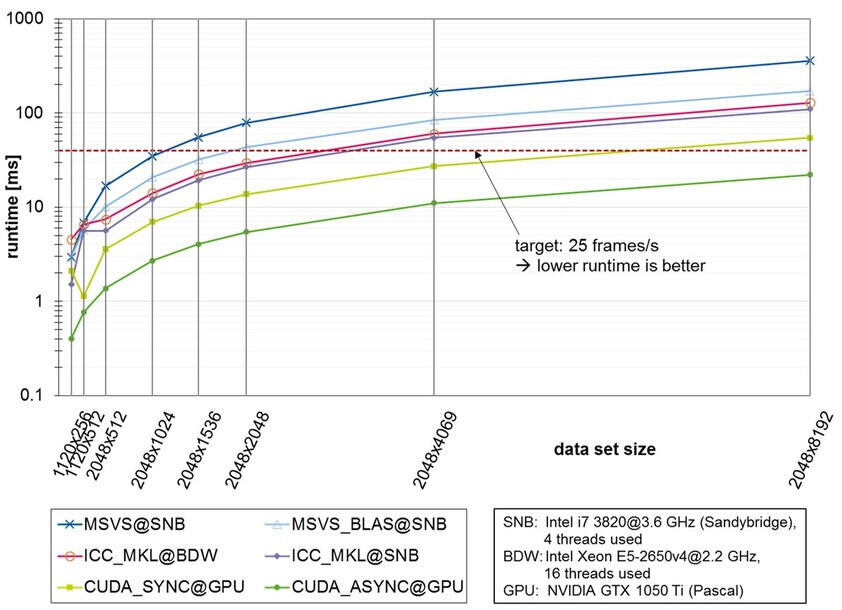