You Are Here: RWTH Leading the Way With CLAIX High-Performance Computer 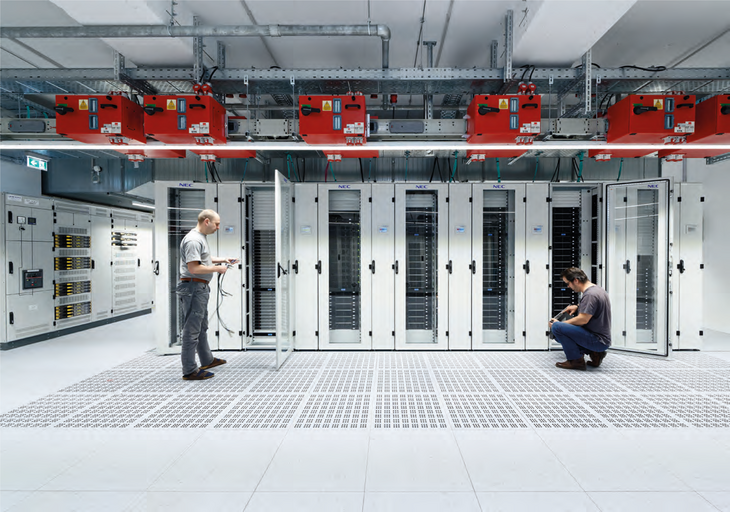 The second stage of the CLAIX-2018 high-performance computer – HPC for short – went into operation at the RWTH IT Center at the end of 2018.

It is now ranked 92nd in the list of the top 500 most powerful HPC systems in the world and is currently the only German innovation among the top 100 systems. Besides these feats, according to heise.de, it is also the fastest computer among German universities.

CLAIX 2018, short for Cluster Aix-la-Chapelle, consists of around 1,100 computing nodes. These computing nodes are equipped with two Intel Xeon Platinum 8160 processors, which each offer 24 cores at a clock rate of 2.1 GHz and 192 GB of RAM. In application phases where full parallelism is not exploited, the clock rate can even be increased up to 3.7 GHz, meaning the second stage theoretically offers a maximum computing power of 3.55 PFlops. In addition, 48 computing nodes are equipped with two NVIDIA Volta V100 GPUs, which are interconnected in the node with the fast NVLink. This node type helps accelerate suitable applications and the efficiently perform special steps such as data analysis. All the CLAIX 2018 computing nodes are connected to an Intel Omni-Path 100G network.

The second stage of CLAIX achieved significant performance improvements in simulation applications, increasing the average pro-core performance by 30 percent while maintaining the same data sets. In addition, another high-performance Lustre-based storage system was put into operation, which can also access CLAIX’s first stage through a special network connection. It offers a capacity of 10 PB and a bandwidth of 150 GB/s for reading and writing.

Parallel to the well-known Top500 ranking, an alternative ranking has been available since 2009 - the GREEN500, which sorts the TOP500 supercomputers according to their energy efficiency. This list is based on the ratio of flops per watt, i.e. computing power per power consumption. However, the energy requirement of the cooling system is not taken into account. In this international comparison of the most energy-efficient systems, the CLAIX even ranks 51st in june 2019. True to the RWTH motto "Thinking the Future", the CLAIX-2018 computer also shines in terms of sustainability.