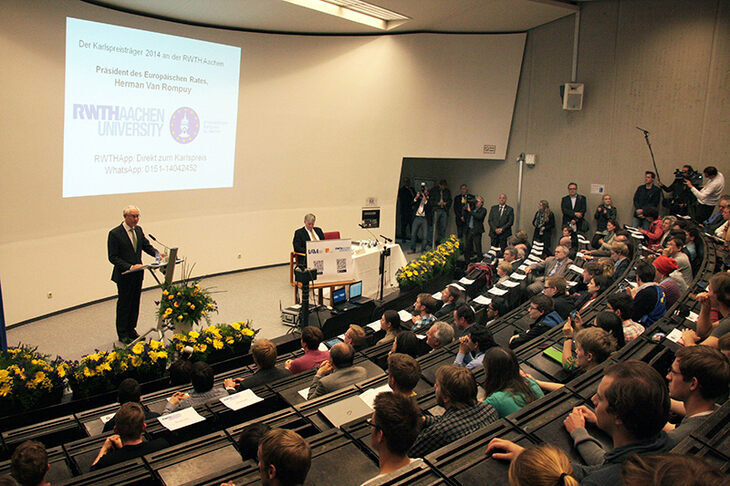 On May 28th the IT Center supported the discussion with the winner of the charlemagne prize Herman van Rompuy in cooperation with the Institute of General Mechanics (IAM) using a new feature of the RWTHApp: directfeedback – a channel that allows the audience to directly communicate with the lecturers.

The directfeedback feature was initially designed by the development team of RWTHApp and student delegates to offer an easy way to post questions and remarks to teachers in lectures with many participants.

It was a pleasure for us to be able to initially make this feature available to a wider public and use it to support the discussion with the winner of the charlemagne prize. During the 60 Minutes of discussion the RWTHApp was used by the roughly 200 participants to post their questions to Herman van Rompuy and thus initiated a living discussion.

Starting in the winter term the RWTHApp will include direct feedback as a standard feature offered to all teachers and students to support their lectures. Apart from text messages it will allow the students to send photos directly to their teacher. Also this functionality will be demonstrated during the “Talk Lehre 2014” on July 2nd. Until the start of the winter term 14/15 there will be an updated version of RWTHApp in the stores.

We curious about your thoughts on this new feature and would like to offer guidance to introduce direct feedback in your scenario.