You Are Here: Participants of Police Workshop visit the aixCAVE 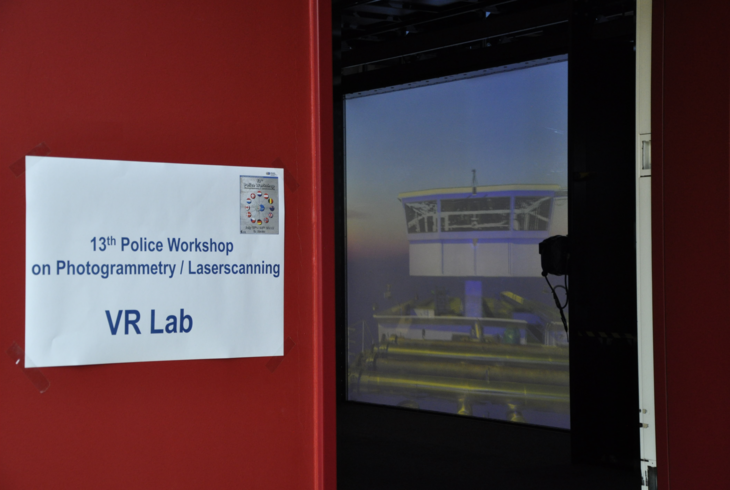 Innovative crime/accident scene visualization by means of Virtual Reality in the aixCAVE.

From July 11 – 15, 2016 the 13th International Police Workshop Photogrammetry / Laser Scanning was held at LAFP NRW (Landesamt für Ausbildung, Fortbildung und Personalangelegenheiten NRW), at the education center in Neuss. 100 specialists for crime scene and traffic accident documentation and damage visualization, police officers, forensic specialists, scientists, surveyors and coroners from 12 nations came together for a 5-day workshop, among them Fabian Lennartz and Andrea Bönsch from the Virtual Reality Group. The workshop discussed the possibilities and limitations of three-dimensional crime/accident scene recording and visualization.

The participants were informed via presentations, workshops and lectures about interesting cases, innovations in hard- and software as well as quality management, encouraging a professional exchange.

Besides the theory, a practical exercise was part of the workshop program: on the second day, a major disaster in form of an “explosion of a tanker vessel in Neuss Harbor” was simulated. The task was to measure and document the extent of the damage. Different teams used the latest technology from ashore, on and below the ship’s deck, from the air and from underwater.

After the exercise, the individual documentations were combined, obtaining a detailed, three-dimensional reconstruction of the simulated accident scene for screen visualization. Thanks to a close cooperation between the Detective Chief Commissioners Mr. Voßenkaul and Mr. Weiske, who lead the seminar, and the Virtual Reality Group, the recorded data could be visualized in a way, not yet used in the crime/accident scene visualization: via Virtual Reality.

To this end, an excursion to the RWTH Aachen took place on the fourth day of the workshop. After being welcomed by the director of the IT Center, Prof. Matthias S. Müller, and an introductory talk on Virtual Reality by Andrea Bönsch, the participants visited the aixCAVE in which the tanker was visualized. By this, they were able to weigh up the advantageous and disadvantageous of enlarging the methodological toolbox of crime/accident scene visualization by means of Virtual Reality. A second application using the Oculus Rift, and additional lectures rounded off the excursion.