You Are Here: Modification of RWTH XWiN access router 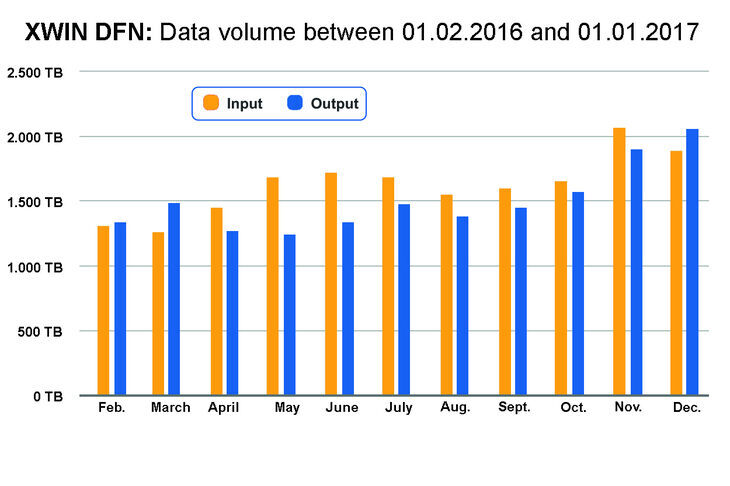 The IT Center uses two Nexus 7000 routers as a gateway to the Internet. Because of the redundancy reasons both routers are distributed between two different buildings. The station in the Lastschwerpunktstation Nord is connected directly to DFN (German research network) router in Frankfurt via 5x10 GbE while the router in the IT Center Wendlingweg building has a 5x10 GbE connection to DFN Hannover station. If one of the uplink routes gets out of order, the redundantly available uplink will be automatically used per Border Gateway Protocol (BGP).

The hardware in operation was commissioned in 2010 and has been constantly updated since then. But the update to the future technologies such as connection to the 100GbE or a bigger amount of 40GbE ports requires an exchange of the chassis where separate modules, supervisor-engines and network parts are connected. The exchange of such kind requires a complete router turn-off in every station.

The diagram shows the monthly data volume development in 2016. The data traffic via the XWiN-connection increased from 1300 TB in January to 2000 TB in December or in other words by a factor of 1,5. The values are true for the incoming as well as for outcoming data traffic. To guarantee enough reserves in the periods of the most active usage bigger scopes are required.

After a two-month planning and preparing phase the modification date was set on 28.12.2016. Between Christmas and New Year the university is as a rule not as full as usual: a lot of employees are on vacation and students use this time to visit their families.

In case the access routers are out of order the complete IP-connection between the university and Internet does not work anymore. As a routing table contains about 300.000 entries and lots of configuration changes were made it was impossible to avoid small disruptions. The works began around 2 p.m. with three teams involved (one team for each station and configuration team). At first systems as firewalls were modified where no disruption was expected. Starting from 7 p.m. the routing und uplinks to the peering (= direct network coupling including coupling to Juelich research centre) were modified. Short disruptions during this modification phase took place. Starting from 8 p.m. final tests were carried out and around 9 p.m. all the works were completed.

The RWTH Aachen now has two modern Nexus 7700 systems in operation which are able to fulfill the planned technological requirements for the next 8 years.