You Are Here: On the death of Prof. Haupt - an obituary

On the death of Prof. Haupt - an obituary 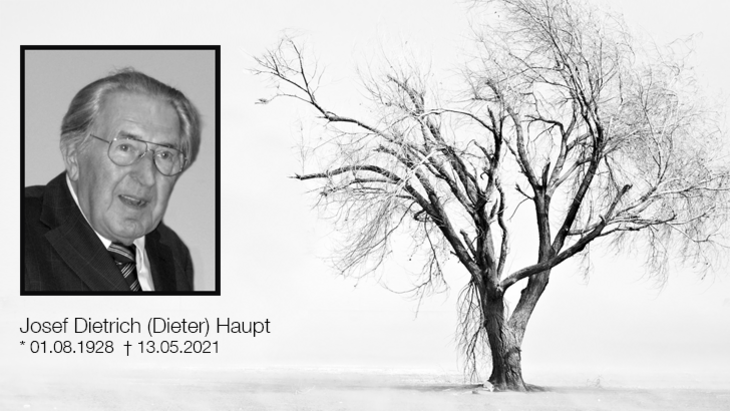 Deeply saddened and very sadly we take leave of the former head of the Computing Centre Univ.-Prof. em. Dr.rer.nat. Josef Dietrich (Dieter) Haupt, who passed away on 13 May 2021 at the age of 92.

With him, we are not only losing a pioneer of technological and infrastructural IT development, but also a committed thinker and doer who was always concerned about the team spirit and the continuous development of the staff. To this end, he promoted regular constructive exchange across disciplines and generations well into his old age.

His activities were not limited to the RWTH Aachen, but he was actively involved in numerous projects and committees on a supra-regional level. For example, he was chairman of the Commission for Computing Systems (KfR) of the German Research Foundation (DFG) for a total of 10 years and thus continuously accompanied not only the spread of computer equipment at universities and IT in university administration and university medicine, but also the general development of computer centers.

In doing so, he never lost sight of the people. As early as the mid-1980s, for example, he campaigned for universities to be comprehensively equipped with computer workstations for students. To this end, he conceived what later became known as the Computer Investment Program (CIP), which he implemented with the support of the then Federal Minister for Research and Technology, Heinz Friedrich Ruppert Riesenhuber. Appropriately, as early as 1989, every student automatically received a code to activate a personal e-mail mailbox when they matriculated.

During his 12 years as a member of the scientific advisory board of the Gesellschaft für Datenschutz und Datensicherung e.V. (Society for Data Protection and Data Security) in Bonn, he worked closely with business, administration, science and politics at an early stage to ensure that data protection was sensible, justifiable and, above all, technically feasible.

For a total of eight years, he was an active member of the leading committees of the Deutsches Forschungsnetz e.V. (DFN). of which he was chairman between 1991 and 1993. Immediately after reunification, for example, the DFN-Verein set up the extended research network (ERWIN) in the new German states under his chairmanship. This rapid connection to the science network (WIN) installed in West Germany in 1990 and the associated optimal equipment of many East German universities with new technologies was a fundamental prerequisite for the rapid merging of the German-German science landscape.

But the infrastructure alone was not enough to realize the connection to the West. It also required the appropriate technologies on the ground, and so Prof. Haupt invited the then heads of the computing centers of East German universities to Aachen for a week and taught them the structure and application process of the (West) German funding institutions that were relevant to them. High-ranking representatives gave lectures and provided insights into their funding guidelines and application procedures. Only with knowledge of the funding opportunities were they in a position to procure the necessary hardware and software. This also laid the foundation for solid IT equipment at East German universities.

In addition, he was a member of the scientific council of the Jülich John von Neumann Institute for Computing (NIC) until after his retirement. The council advises the directorate and the contract partners on research issues as well as on computer equipment and other resources for the NIC. He also establishes the rules for the allocation of computing time on NIC computers.

In October 2003, he was awarded the Cross of Merit 1st Class of the Order of Merit of the Federal Republic of Germany for the services he has rendered in the field of data processing in higher education beyond the borders of North Rhine-Westphalia and nationwide. In the same year, he was appointed Fellow of the Society for Computer Science e.V., of which he was a co-founder.

In addition to the technological and infrastructural development of the RWTH, the state and the (new) Federal Republic, he has always been committed to interdisciplinary, cross-generational exchange among staff and alumni.

Thus, in 1981, Prof. Haupt established the "DV-Fachseminar für Operateure, Netzwerkoperateure und Technische Angestellte" as the first continuing education event for operators at German university data centers. In its almost 40-year history, the seminar has developed into a traveling event and is organized annually by a university computer center or an affiliated institution. A special feature of this event to this day is the heterogeneous variety of topics, the exchange between the most diverse employees, and the intensive networking character of the event.

In his annual three-day technosophical seminar, which he organized, people of different ages, diverse training and disciplines met for stimulating discourse. In this way, he wanted to illustrate an understanding of the influences of developments on the many different fields and motivate the participants to always keep the effects of their actions in an interdisciplinary perspective.

With this intention, Prof. Haupt also participated in the founding of the Forum Informatik at RWTH Aachen University - an interdisciplinary association of institutions for the creation and use of synergies on the one hand and interdisciplinary exchange on the other.

Everything he did, he did with great passion for the cause and the people surrounding him. And so he leaves a big gap in the IT Center. His memory remains an honorable obligation for us. He will always remain a role model for us.

Our deepest sympathy goes to his wife and family.